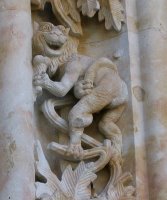 In which we reveal the identity of the Mysterious Spanish cities in this post and that post, while we explain which of our Mysterious Cities also boasts this highly sought after ice cream-cone wielding creature.

The Barqueta bridge was constructed in 1989-1992, to carry Sevillanos and visitors over the Guadalquivir to the site of the 1992 Expo. Today the Barqueta is the main entrance to the Isla Mágica theme park.

Mysterious Cities 2: The astronaut of Salamanca

This faux-gothic astronaut adorns the Puerta de Ramos of Salamanca's New Cathedral. Seems stonemasons have a tradition they've chosen to keep in Salamanca: the addition of new stone figures during a restoration. Stonemasons with my kind of sense of humor added the astronaut and his neighbor on the Puerta de Ramos, the creature with the single scoop in a cone, to represent their own age during a 20th century restoration.